All events and activities will be held at
Purina Farms, 500 William Danforth Way
Gray Summit, MO 63039

Dedicated to the memory of Nancy Hughes of Trails End Borders.

The 2023 BTCA National Specialty will be dedicated to the memory of Nancy Hughes of Trails End Borders. Nancy was a long time member of the BTCA and a successful breeder of many fine Border Terriers who won multiple awards at many National Specialties, particularly in the 1970s and 1980s.

We are asking for contributions of photographs of Nancy or short remembrances about her to create a special tribute to be displayed at the 2023 National Specialty. 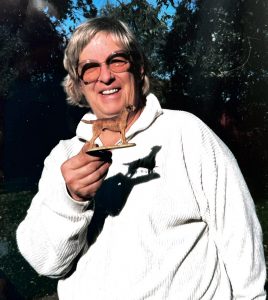 NASDA Clinic and Trial at Specialty

The Border Terrier Club of America will be offering a NASDA (North American Dog Sport Association) Clinic and Trial at the 2023 National Specialty.

The North American Sport Dog Association (NASDA) was formed to demonstrate the breadth of canine olfactory abilities, in other words, to show how well non-professionally schooled dogs can easily be trained to use their noses to find rats, an antler shed or their owner’s lost car keys.

Trials are designed to resemble both historic working and competitive field work as closely as possible. NASDA Working Dog Trials offer an opportunity for all dogs to engage in scent games. Competing teams can get titles and championships that showcase their merits and abilities within hunt and search situations.1

Put simply, our Border Terriers are predisposed to work quarry. For those that are not able to attend earthdog or working terrier tests due to regional limitations, NASDA can help your Border reach its full terrier potential. NASDA trials build the skills necessary for your dogs to become successful hunters in the field as well as in urban settings.

Trailing and Locating (TL) trials allow your Border to follow a scent trail in a natural environment to locate and work quarry in a manner similar to earthdog with rats also in cages, but hidden above ground. TL is a great way to get young dogs introduced to working quarry. These tests can even build drive in those Borders that like to aggressively stare at rats in the earthdog tunnel. Simply stated, you and your dog leave the start line together and your dog follows the laid down scent line to the rat cage. Many dogs air scent as well. No previous training is necessary for either you or your dog. Unlike scent work or barn hunt, the judge makes the call when your Border has located its quarry. The first two levels of TL can be performed on lead, but we would recommend using a long line if you’ve got a runner!

Urban Locating (UL) trials do not utilize a scent trail for the dog to follow. These hides are placed in a manmade environment such as a shed or garden and the quarry odor is allowed to pool. Like TL, the judge also makes the call when your Border has located the quarry. Urban search areas are smaller than TL tests, but dogs must be kept on lead at all times. A 12’ to 15’ lead is commonly used.

In NASDA trials, all dogs start off with a perfect score of 25. A passing score is 20 points. Deductions, listed in the Master Handbook on the nasda.dog website, may be made for things like having a tight leash (you can’t lead your dog to the quarry), failing to pass through the start line, etc. Also, you can choose to have the judge tell you the hide location in both TL and UL level I and II searches; level III searches are done blind. In addition to Trailing and Locating and Urban Locating, NASDA offers Lost Item (like handler discrimination) and Shed Antler searches. Dogs that have earned Trailing and Locating titles can also compete as part of a Brace team to earn Trailing Brace titles.

The 2023 BTCA National Specialty will be dedicated to the memory of Nancy Hughes of Trails End Borders. Nancy was a long time member of the BTCA and a successful breeder of many fine Border Terriers who won multiple awards at many National Specialties, particularly in the 1970s and 1980s.
We are asking for contributions of photographs of Nancy or short remembrances about her to create a special tribute to be displayed at the 2023 National Specialty.

An exciting new $500.00 scholarship will be awarded to the student who is judged Best Junior Handler at the 2023 BTCA National Specialty in June.
The Junior Handler or his/her family must be a member in good standing of the BTCA or an affiliate/ regional club at the time of the National Specialty. The BTCA Health and Scholarship Foundation will reserve the funds until the student is accepted at an accredited junior, community, or 4 year college. The Scholarship must be used within 2 years from the date of his or her secondary school graduation.

Please be sure to follow the BTCA 2023 National Specialty on Facebook. New information will be added as soon as it becomes available.